What the heck is Coffee & Ghosts?

Coffee & Ghosts is a cozy paranormal mystery/romance that is told over a series of episodes and in seasons, much like a television series.

Ghost in the Coffee Machine, which I think of as the pilot episode, began life as a short story that first appeared in Coffee: 14 Caffeinated Tales of the Fantastic.

Once, a very long time ago, I wrote a murder mystery that involved a ghost. During the research phase, I came across a tidbit about catching ghosts using coffee and glass jars. The novel never went anywhere, but years later, when I saw the call for submissions for Coffee, something clicked. Katy, her grandmother, and their business of catching ghosts with coffee and Tupperware (a far more practical and, frankly, safer option) were born.

Not too long later I realized that I wasn’t done with coffee and ghosts—or rather, they weren’t done with me. They’ve demanded their own type of storytelling as well.

Serial fiction is exciting and fun to write. It’s different from a novel in that each episode has its own story arc but also supports a larger one for not only the season, but the entire series. It’s flexible, for both the writer and the reader. You can read an episode at a time in between other books or binge-read the entire series at one go (brew some Kona blend for that).

No matter how you read, thanks for coming along on this journey with me. 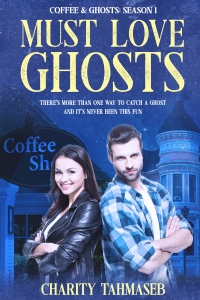 Ready to binge-read the entire series? Find all the books here.

Like audiobooks? Check out the Audiobook page for links to the audio version, read by award-winning narrator Amy McFadden.