Katy and her grandmother have always used coffee to catch ghosts. It pays the bills and keeps them in high-end beans. But after her grandmother dies and a rival ghost hunter moves to town, Katy fears things will never be the same.

From a beguiling and charismatic ghost whisperer to her new partner’s ghost swallowing brother and even a (short) stint behind bars, Katy navigates her new reality, uncertain her skills are equal to the tasks at hand. But are these things mere distractions–or do they hide something darker, far more sinister, something that has a long-held vendetta against Katy?

To survive, Katy must uncover an ancient secret. She must brew her very best Kona blend. She will need to rely on unexpected and unpredictable allies.

To survive, she will need to trust what’s in her heart. 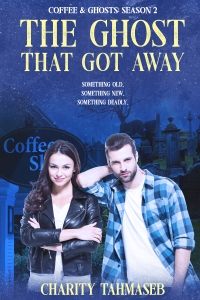 When Christmas brings both strangers and ghosts of the past to Springside, ghost-catcher and expert coffee-brewer Katy Lindstrom fears her new business, new relationship, and quiet hometown will never be the same.

The ghost of a jealous dead husband. A sexy siren of a spirit who has a claim on Malcolm. It will take more than some excellent Kona blend to permanently rid Springside of both the unwanted ghosts and the necromancers who brought them to town.

But Katy harbors a secret, the sort more than one necromancer is willing to kill for, and this time, the stakes are higher than she ever imagined.

This time, to keep Malcolm, Springside, and even the world safe, Katy must do the one thing she vowed never to do.

And once she does, there’s no turning back.

Reluctant necromancer Katy Lindstrom is worried about mixing business with pleasure. All she wants is a few hours alone with her more-than-a-business-partner, Malcolm Armand.

Before they can sort through their feelings over a cup of Kona blend, another necromancer lands on Katy’s doorstep.

He brings with him tales of old betrayals and fresh lies. But a bigger danger lurks in Springside—a powerful ghost sent to destroy Malcolm’s brother.

This is just the start.

After Katy uncovers long-held family secrets, she finds herself entangled in past and present—and on a mission to find the truth. To unravel the mystery that links her family with Malcolm’s, she’ll need to bargain with a powerful entity and face retribution from the necromancer community.

Where Katy must go, Malcolm can’t follow. This time around, she’ll need to make the ultimate sacrifice. This time, to save Malcolm, Springside, and everything she loves, Katy will need to give them up forever. 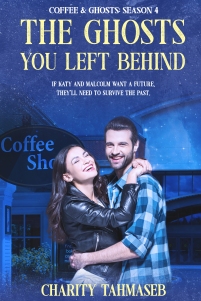 When Katy and Malcolm discover a secret stash of Springside ghosts, they can’t tell if they’re on a rescue mission, walking into a trap—or dealing with something far more sinister.

But the simple act of freeing the ghosts sets the past on a collision course with the present.

Katy has always known the past can haunt. Usually, that’s something she can fix with freshly brewed coffee and some Tupperware.

When she falls in, survival may be impossible. But to escape, Katy must navigate threads from the past, deal with capricious spirits, dubious allies, and ruthless adversaries.

And if she fails?

No one she loves will have a future.

Things happen when you stray from the path:

Step from the well-trodden path and into the world of sour magic and unexpected consequences. Here you’ll discover how to:

Straying from the Path includes two brand-new novellas and four short stories in the (forthcoming) Sour Magic series of fairy tales, perfect for anyone who loves retellings and fairy tale adaptations.

Remember, anything can happen when you stray from the path.

Quick link to all vendors

Stung by an epic betrayal, Camy Cavanaugh relies on the sure things: her best friend, her job as peer tutor, and her safe spot on the sidelines of life. But when she hacks into a secret, trash-talking website, it ignites a war between the sexes that won’t end until the whole school is turned upside down–and Camy’s world is turned inside out.

Now the hottest girls in school refuse to date the A-List boys. But with the Homecoming dance looming, everyone from the queen bee to the girl “most likely to” pushes Camy to hook them up with guys from the nerd herd.

And then there’s quarterback, A-lister–and former crush–Gavin Madison. He hasn’t spoken to Camy in three years … but he’s talking now, begging her to pair the guys on the football team with girls from the Honor Roll.

It’s a contest of wills and everything is on the line–even Camy’s heart. Will she retreat to the sidelines, or will she find the courage to get back in the game?

Kindle  Print  Links to all vendors and territories

Sometimes staying silent is the biggest lie of all.

Sophomore Jolia does the one thing no one expects from the girl who has perfected the art of keeping quiet.

She joins the speech team.

Jolia can’t confess the real reason–not to her best friend, her new teammates, or even to crush-worthy rival Sam who offers to coach her in secret.

Keeping quiet might be the easy way out, but when what Jolia doesn’t say starts to hurt those around her, it might just cost her a best friend, her spot on the team, and even Sam.

But she isn’t the only one with a secret. It’s going to take words–her words–to make things right.

If only Jolia can find them.

MacKenna’s mother died when she was a baby, a casualty of the first Gulf War. Now seventeen, MacKenna has spent her life navigating the minefield of her dad’s moods, certain of one thing: she is destined to follow in her mother’s combat boots. But when she pursues an ROTC scholarship, she finds herself at war before even enlisting.

Her father forbids her from joining the military, inexplicable considering he’d raised her to be a “warrior princess.” MacKenna turns to her grandmother—who arms her with an ammo crate containing her mother’s personal effects from the war. Hidden in the crate’s false bottom is a journal, one her mom stashed there hours before her death.

While MacKenna untangles the secrets of her parents’ tragic love story, her own life unravels. Dad’s behavior becomes erratic, her best friend grows distant and even hostile, and a boy from her past returns—with a life-threatening secret of his own.

If ever a girl needed her mother, it’s now.

The pen might be mightier than the sword, but are a mother’s words strong enough to slice through years of hidden pain? Can those words reach through the battlefields of the past to change MacKenna’s future?

A YALSA 2012 Popular Paperback pick in the Get Your Geek On category!

When self-proclaimed geek girl Bethany Reynolds becomes the newest member of the varsity cheerleading squad, she realizes that there’s one thing worse than blending into the lockers: getting noticed. Who knew cheerleading was so hard? Well, at least there’s a manual, The Prairie Stone High Varsity Cheerleading Guide.

Too bad it doesn’t cover any of the really tough questions. Like:

Bethany is going to need all her geek brainpower just to survive the season!

From a post-apocalyptic cityscape to the year’s most disastrous prom, follow eight different heroines as they navigate their way through time and space and AP World History. Includes:

Here be dragons … six of them.

What if you had to barter for your village while tied to a stake? Or if the one thing you always wanted–a dragon of your own–was forever denied? Where might a midnight chase through a stately hotel lead?

From adversary to lover to devoted friend, from epic to urban fantasy–follow six heroines as they encounter six very different dragons. They’ll barter and bargain, chase and be chased, and in the end, learn the true meaning of dragon’s bane.

Dragon Whispers gathers together the dragon stories from The (Love) Stories for 2020 project:

Links to all vendors

From urban fantasy to epic, fairy tales to the future, contemporary to the historical, this full-length collection from Charity Tahmaseb contains four dozen stories and spans fifteen years of writing.

Sometimes somber, often humorous, these quirky and imaginative stories revolve around love lost and love found, familial and sibling love, friendships, and more. Genre-encompassing and often genre-defying, these tales run the gamut of invisible prom dates to dragons to the end of the world.

Here’s How We Survive gathers together all 48 stories from the (Love) Stories for 2020 project and includes award-winning and previously-published stories along with ones written exclusively for this collection.

Links to all vendors