For March, it’s all about strange and surprising connections, unexpected friendships and traditions.

To get you ready for springing forward, I give you Keeping Time. 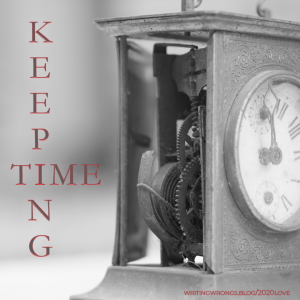 The mantel clock kept its own time. It was fussy, too, in the way old clocks sometimes are, refusing to work when wound in a way it found unacceptable. Because of this, in each generation, the task fell to either the youngest or oldest member of the household.

Maisey was five when her grandmother showed her how to wind the clock. She bounced on the balls of her feet, her fingers itching for their turn. She’d warm the brass key in her palm, the way her grandmother did. Every evening they’d clean the old clock with a soft cloth and lemon-scented polish.

“Pay attention,” her grandmother would say. “It will soon be your turn.”

Her grandmother chuckled. “Not soon enough for your father.”

But when Maisey’s turn finally came, her feet no longer bounced. After the funeral, she dragged a chair through the gathering, cutting off words about her grandmother—some soft, some less so—and clambered up to reach the clock on the mantel.

“Maisey!” Her mother’s voice cracked, its edges so sharp that, if it were a real thing, you could cut someone with it.

In the middle of murmured condolences and her mother’s sobs, she pulled out the key and wound the clock.

When her father retired, Maisey offered the key to him. But he had too many golf games—and then, too many back problems—to bother with an old clock. Her mother spent so much time canning tomatoes (which no one ever ate) and volunteering (which gave her a headache) to remember the old timepiece gathering dust on the mantel.

So Maisey dug out a chain from her jewelry box and hung the key around her neck. The clock ticked on, grateful for the gentle touch of Maisey’s fingers. When she packed the car for college, she placed the clock in last, belting it into the front passenger seat.

She went through three roommates until the campus housing department found one who didn’t mind the faux mantelpiece taking up half their dorm room. After one too many broken hearts, Maisey let each perspective boyfriend wind the clock at least once. In the end, she picked the man with the lightest touch and most nimble fingers. She learned there were advantages to this well beyond winding clocks. When she graduated, she took him, the faux mantelpiece, and the clock.

Together, they built a life.

When at last her granddaughter was born, a girl whose eyes shined each time she heard the clock tick, Maisey knew her own time was drawing near. These days, she polished the clock more often, fussed over its placement on the mantel.

“We need to spruce you up,” she’d say. “Can’t have you looking your years—not like me.”

The wood casing gleamed in the light. When little Tessa pressed a finger against its side, she gave Maisey a delighted smile.

It always was, this old clock, warm and constant.

“You have always been my loyal companion,” she told it on the day she loosened the chain from around her neck.

Einstein once said, “The only reason for time is so that everything doesn’t happen at once.” But what if, for the briefest moment, she could defy that rule—and even Einstein himself—by passing on the key before passing on herself? When Tessa turned five, Maisey presented the key to her, chain and all, and hovered while the little girl wound the clock for the first time.

And yes, there it was, her life, all of it, from her own grandmother’s death, the scrape of the chair across the floor, sharp braces against her lips, the whisper of taffeta prom dresses, textbooks weighing down her arms. Timothy on bended knee, the mantel and clock behind her, as if peering over her shoulder. On it went, in one great wash through her blood—all of time, all her life, all at once.

That night, the clock stopped ticking.

The afternoon of her grandmother’s funeral, Tessa dragged a chair across the floor and scrambled up to the mantel. She turned the key once, twice. Tessa inhaled lemon-scented dust, then held her breath. Behind her, the air shook. She turned, saw her mother, whose body trembled with sobs. Tessa jumped from the chair and threw her arms around her mother.

From the mantel, something shifted inside the clock. A single tock shuddered through its wood casing. Then, once again, the old clock started keeping its own time.

Keeping Time was first published by Kazka Press. It was subsequently produced in audio by The Centropic Oracle. You can listen to the story here.

Miss a story? Find all the titles here.