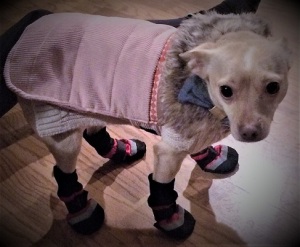 It’s cold here, so very, very cold. Even with the sweater, coat, and booties, Oscar was in no way inclined to stray outside.

We had a nice, quiet holiday. I spent some time doing behind-the-scenes sorts of tasks to get ready for the new year. And I took a peek at what I did during 2017 as well.

I submitted to ~46 short story markets this year. (I think it’s about 46, but it could be a few more since I sometimes forget to log a submission).

I sold five stories this year:

I had three of those stories published:

A Knight at the Royal Arms in Pulp Literature #15

Straying from the Path at The Centropic Oracle

I also wrapped up the Third Season of Coffee and Ghosts.

I’d really hoped to start publishing a new series this year as well. That didn’t happen. There were a few reasons for that.

One, I was contacted by an editor from one of the big(ger) publishing houses to audition for a work-for-hire project. I decided to give it a try, not so much for the traditional contract but simply to see if I could do it. The editor sent me a three-page synopsis, and from there, I worked up three sample chapters of about 6,500 words. That was back in May. And no, I haven’t heard anything yet. I actually don’t expect to.

That’s okay. I’m pleased with what I wrote and the fact I could take an idea and make it my own. Plus, the research I did for this project led me directly to one of the new series I’m writing now.

So it all works out.

Oh, and how did this editor know to contact me? She didn’t say, but my guess is Dating on the Dork Side, and one of her books were in each other’s Also-Boughts on Amazon.

If I didn’t get all the writing in that I wanted to, I did some amazing writing-related things this year:

On the business side of things, I worked on graphic design (Photoshop in particular), and finally took the plunge and signed up for Mark Dawson’s Ads for Authors course.

In terms of sales, I had my first four-figure month and I’m ending the year at five figures, which isn’t too shabby for my part-time self-publishing business. Not only that, but Amazon selected Dating on the Dork Side as part of their Prime Reading list over the summer. That didn’t hurt.

So, all in all, not a bad year. I always think I can do more. But sometimes it’s good simply to do a little bit each day. It adds up. 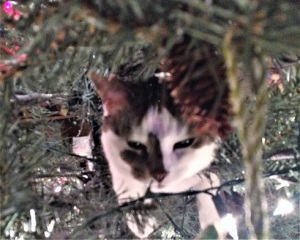 Things slow down once school is out for winter break, and the dance team is on a break as well (that sound you hear is my sigh of relief). So it has been a quiet week.

Well, except for the cat, that is. It took her until the 22nd, but she finally claimed the tree. She didn’t stay long. I suspect now that she’s older, it isn’t as much fun.

I did get some writing in this week and made progress on the fairy tale project. Plus, I hit 90 books read for the year (so far). Even though I’m on vacation, I’m not sure I can make it to 100 books by the 31st. That being said, I think I’m going to try.

Even more dancing this week. There’s one more meet on Tuesday, and then that’s it until January. Whew!

I did get some writing in, +5,000 words or so. And my story, Steadfast, in Flash Fiction Online, got the most amazing review here.

And now I need to go figure out Christmas, or at least wrap some presents before the tower of Amazon boxes in the front hall tips over and crushes someone.

It’s been a busy week, what with some snow, a dance meet and an invitational, some ads classes, some writing, and some extra-long commuting thanks to the snow mentioned earlier.

And hey, it’s snowing on WordPress, too!

This is what I worked up in Photoshop this week, a quick cover for two of my short stories. The rights have reverted back to me, and I can do anything I like with them. So. What I would like to do with them is send them along as a free read to my mail list.

Busy week! My daughter had a dance meet this week (the first of the season) and then an invitational on Saturday. I. Am. Exhausted. You’d think I was the one doing all the dancing.

A little writing, a little work on a fairy tale project, and that’s about it. Oh, except for Steadfast, of course.

My story Steadfast is in the December issue of Flash Fiction Online.

The story is a modern retelling of Hans Christian Andersen’s The Steadfast Tin Soldier, with a gender flip and an unapologetic happy ending. (Take that, HCA!)

Head on over and give all the stories a read.