Getting Schooled: The unbearable lightness of yearning

Ha. You thought I forgot. But, I. Did. Not. Butler is back and he’s feisty as ever. Today’s topic is yearning. Or, in Butler’s words:

I would say that of the three fundamentals of fiction, there are two that aspiring writers never miss: first, that fiction is about human beings; second, that it’s about human emotion. Even when fiction writers are writing from their heads, abstracting and analyzing, they’re mostly analyzing emotions; so even if they’re not getting at the essence of emotion, they’re trying to.

But the third element, which is missing from virtually every student manuscript I’ve seen, has to do with the phenomenon of desire.

By which he doesn’t mean romantic desire (although I suppose it could).

Yearning is always part of the fictional character. In fact, one way to understand plot is that it represents the dynamics of desire.

He goes on to state that you can have a story rich in character, conflict, problems, attitude and so on, and totally miss the desire boat. And if that ship sails without you, you pretty much don’t have a story.

This is also the chapter with what I call the Great Genre Dis. Butler draws a firm line between writing that is art and … all the rest, what he calls “entertainment writing.”

His main argument is essentially that this type of writing uses generalizations and abstractions and that what readers do is fill in the blanks left by those abstractions.

I’m neither here nor there with this argument, although I know it upsets some writers greatly. There’s some great genre fiction out there and some pretty crappy literary fiction. I also find some “entertainment fiction” far from entertaining and some literary fiction utterly absorbing.

I don’t know art, but I know what I like? What else can you say?

Still, Butler does give genre writers their props, since they almost always “get” the idea that their character yearns for something–to solve the mystery, save the world, get the girl. (Dude, that sounds like a great story. I’m so writing that.)

So, genre wars aside, yearning is a concept that you can apply to any type of writing. I decree it so.

Speaking of yearning, I’m sure you’re dying to know how I’ve done on my quizzes so far:

Temptation, thy name is Staples

I’d write something today, but … 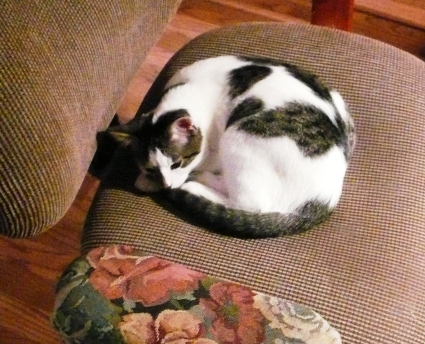 Someone has stolen my chair.

So, yesterday, I took a trip to Staples. And walked out with a box containing ten reams of paper. That’s 5,000 sheets of paper.

That should keep me and Miss B supplied–at least for a little while. I think that’s enough for her to create an entire paper world, complete with its own paper ecosystem.

I also wandered into the clearance section and wandered back out with white boards in silly shapes and singing pens–all fifty cents each. Uh, these would be for the kids, not me.

In the end, I walked out without causing too much damage to my wallet. Still, even with clearance prices and rebates on paper, Staples is a dangerous place for a writer. 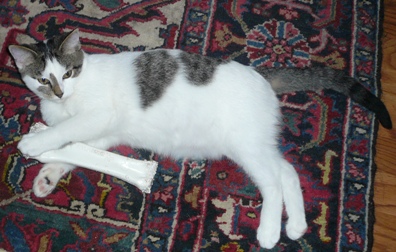 And she’s got a bone to pick with you.

In which I acquire my own PR person

So, we were at Andrew’s guitar lessons last night. His lesson is actually next door to the actual music store (locally owned for fifty years!), in the back of an antique (or junk, depending on how you look at it) shop.

I promised the kids Cold Stone afterwards to celebrate Andrew making the honor roll. So, he was in a practice room, Kyra was inspecting the knickknacks and sneaking up and down the hall, playing spy girl–pretty much what she does every time she comes along with us.

Another mom was there, talking to the clarinet teacher. We’ve chatted before during the overlap of our kids’ lessons. She declared Miss B, as always, the cutest thing. (I’m pretty sure “cutest thing” is in Miss B’s job description.) Then she told me I must be an actress (!) because she knows she’s seen me somewhere before. (Other than music lessons, that is.)

I said, no, actress was pretty much the last thing I’d ever be.

Then Miss B chimed in: “She writes books!”

Sadly, the other mom seemed to believe actress the far more believable scenario.

But it’s nice to know Miss B will speak up on my behalf.

Why read the book?

When you can read the Wordle? Seriously. Check it. The Geek Girl’s Guide to Cheerleading:

And just for fun, I did The Fine Art of Holding Your Breath. This may be the only way you read this book. 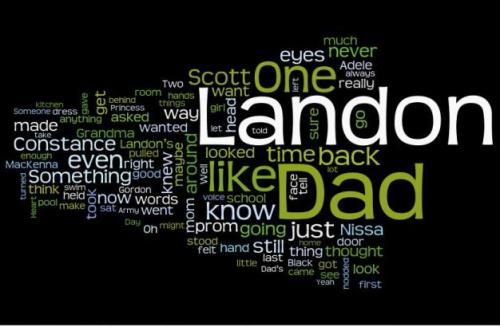 Look at how large the word one is here and in Geek Girl’s Guide. What’s up with that? Clearly this is my quirk.

Don’t worry. I haven’t forgotten Butler (or perhaps you wish I would). We’re having crunch time at work and I need more time to reflect on just what it is he’s saying.

So today I thought we’d review what we’ve learned so far thanks to Robert Olen Butler. But instead of actually writing something, I thought I’d let the Internet do it for me.

Just think of how close we are to the day where we won’t have to write our own blog posts!

Summary brought to you by Wordle.

Getting Schooled: The (twilight) zone

Now that we’ve left boot camp and hell (bonus side trip!), we get to enter the zone. If you’re familiar with the term re: athletics, Butler uses it much the same way. It’s muscle memory, only for writing, it’s dream space or sense memory. You perform (or write) without thinking. It’s all from the unconscious.

So, cue the music: Y’all ready for dis?

But getting into the zone is difficult. We don’t want to go there in the first place (hell, remember?), so NOT going there is far more tempting than actually going there. Until we actually get there, that is. Because when you’re writing in the zone, it’s great. You’re on the literary equivalent to a runner’s high.

So, getting there? Well, here’s Butler on that:

So … is he saying we should write every day?

He suggests writing in the morning (going from one dream space to another), but most importantly, using something–a cue, a routine, anything that says: I’m writing now.

This alerts your imagination that it’s time to get busy. So, light your aromatherapy candles, cue up your Yanni album to track three, and set your word processor’s font to GirlyGirl.

Whatever works. Although Butler isn’t talking about pampering so much as routine. He relates how he wrote four of his novels on his train commute from Long Island to Manhattan and had a terrible time when he moved to Lake Charles, LA during the middle of his fifth novel.

Butler also talks about what happens when you don’t write. Unlike a lot of writing gurus, he does believe writer’s block can happen. Again, unconscious = scary place = no writing. You know something is off, you try to write, but you’re thinking too much and nothing’s there.

He relates it to having insomnia. I’ve coined the term “writer’s insomnia” and I think it perfectly describes the state. I know I should write; I really want to write. I try to write.

It can really turn you into a Cranky McCranky Pants. (Not to be confused with Hottie McHottie Pants. Two totally different things.)

Butler describes the self-loathing that accompanies this: you’re both a worthless human being and a worthless writer.

If this is the only message I take away from this course, it will have been worth it.

Because I’ve been Cranky McCranky Pants for the past couple of months. It sounds crazy to have a book sale, with that book coming out in eight months, and not be able to write. But there you have it. I’ll spare you my self-loathing.

The remedy is deceptively simple. You write. Sure, it’s scary, and there’s all those side trips Butler wants you to take. But in the end, you-to borrow an overused but athletically appropriate phrase-just do it.

Dog and cat, living together

So, we integrated the dog and the cat this weekend. We waited a while to do this since Oreo was so tiny when we brought her home from the Humane Society and Sparky is pretty hefty. Plus, Oreo was underweight. Uh, clearly, this isn’t an issue any more.

They had a good time yesterday–maybe too good of a time. If I had to describe them this morning, I’d say they were hungover.

Yesterday, Miss Kitty also dictated some notes to Miss B. Here’s what kitty had to say:

You’ll note that the cat does not profess any love for the rest of us.

More later, maybe we’ll even take a trip into the (twilight) zone with Butler. But now, I’m off to cook some turkey sausage and cinnamon rolls.

We interrupt Robert Olen Butler to bring you this little bit of awesome:

And if it’s on Amazon, you know it’s got to be real.

Despite what I wrote yesterday, Butler really wants to be your friend. He does! He loves you!

Butler’s premise is this: to create art, we must write from the unconscious. We cannot think–as in analytical thought. We have to turn off that self-conscious inner voice that’s going all the time.

Do you narrate your own life? Well, stop it.

It sounds easy, tapping into the unconscious, but according to Butler, not so much. He says:

If the artist sees the chaos of experience and feels order behind it and creates objects to express that order, surely that is reassuring, right? Well, at some point, maybe. But what do you have to do first? And why is it so hard? This is why-and this is why virtually all inexperienced writers end up in their heads instead of the unconscious: because the unconscious is scary as hell. It is hell for many of us.

So, the first stop on our Butler tour was boot camp. Now we’re in hell. Nice.

But why is writing from the unconscious so important? Well, according to Butler, you access your sensual memories rather than your literal ones that way.

This is why when you write something from literal memory no one believes it, even though you protest, “But it really happened!”

Write a big honking lie, but write from the unconscious, from emotion and the senses, and everyone thinks it’s true to life.

Butler’s deal with the senses: Emotions are experienced in the senses and therefore are best expressed in fiction through the senses. He’s got five for you:

Do you feel like we’ve just traveled around in a big circle? I think maybe yes. But that’s okay, it’s gets us ready for our trip into the (twilight) zone. More on that later.