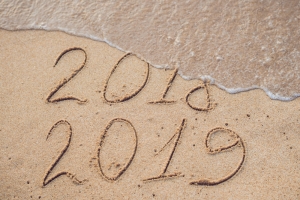 I am charging through the read-through of The Trouble with Necromancers. Once that’s done, and I do a quick check for grammar and typos, I’ll send it out for editing.

2018 was a strange year, for so many reasons. For me, one of the main ones was losing my good friend and writing BFF, Darcy Vance (you can read my tribute to her here). She died about a year ago, and navigating my creative life without her has been difficult. For a bit, I thought I would stop writing altogether.

I didn’t, obviously. Darcy wouldn’t want me to. Still, this year was full of me trying to find my way again, on my own.

Writing. Eh. Not as much as I wanted to or would have liked. That being said, I started the year with an unfinished, very thin draft of The Trouble with Necromancers, and I ended up with something I think/hope works as a series starter, along with ~six books planned.

I switched gears early in the year. I was thinking of focusing on a fairy tale series, but the world building wasn’t there. I switched to a contemporary story because that would be “easier” (ha, ha). What I think happened is I learned a lot about building a series and world from scratch.

I do plan to return to the fairy tale series, but probably not this year. (Then again, when it comes to writing, I never say never.)

I also wrote a novella (soon to be a full-fledged novel) in the Tea & Sorcery series. I also had the chance to write a story that takes place in one of my favorite series. The author extended the invitation, so essentially, it was fan fiction. It was also a lot of fun to do (and necessitated rereading the entire series, of course). I’ll let you know if/when it’s published.

Submissions. I sent out 25 submissions this year. I didn’t write any new stories for the short fiction market, so most of those were either stories I haven’t sold yet or reprints.

I made two sales:

I’m still waiting on a handful of 2018 submissions as well.

Books. I published one book, Straying from the Path. This is my fairy tale compilation, and I was so certain I’d follow it up with more fairy tales. And … someday I will.

What I did do this year is rebrand all my offerings. In doing so, I managed to snag a BookBub Featured Deal for Coffee & Ghosts 1: Must Love Ghosts. That was a big deal. That was a very big deal.

I’m pleased I took the time and effort to re-do all the covers. It really made a difference in the next category.

Money. I’m from the midwest. We don’t talk about money, at least not willingly. But in full transparency mode, how is this indie publish thing working out for me?

Pretty okay. This is the second year in a row that I’ve made five figures. Not living-wage five figures, mind you. Still. Enough that this is certainly worth my while. Plus? It’s fun.

But this whole money thing brings me to my goals for 2019: