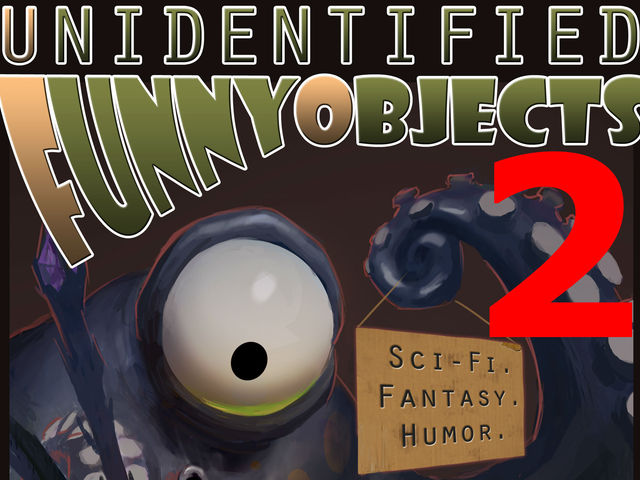 Coming soon (as in September 2013) another volume of funny science fiction and fantasy stories will hit the shelves.

Want to know more? Head on over to the Kickstarter project page to see who is headlining this year’s anthology and all the bonuses for helping to support its launch.

If you’re a writer with a funny speculative fiction story, check out the guidelines here.

I was thrilled to be involved with the first anthology. Will I submit again? I might. I have a story I think might fit. At the moment, I can’t decide if it’s humorous or merely crazy. With my stories, it can be hard to tell.

Read a bit more about how the Unidentified Funny Objects Anthology came to be, the Kickstarter campaign, and its brush with Hurricane Sandy.

And, of course, you can always pre-order a copy (or two) directly from the publisher–it’s the perfect holiday gift for someone who loves funny science fiction and fantasy.

Bad Writing is a documentary about a wannabe poet who sets off on a quest for answers about bad writing, good writing, and the process in between. What he learns from some leading figures in the literary world will inspire anyone who has ever dreamt of creating art. Featuring interviews with David Sedaris, Margaret Atwood, George Saunders, Steve Almond and Nick Flynn.

And as Ta-Nehisis Coates writes:

This topic fascinates me. I so want to see this documentary. I did a lot of reading on talent last year: Outliers, The Talent Code, Talent is Overrated. Seriously, if it had “talent” in the title, I was there. I also reflected on my on rate of failure (epic), in particular, during the last year. I have some definite opinions on writing, talent, success, failure and all the rest. If I can get them into coherent form, I’ll post them here.

The DVD is available from IndieFlix.

Start your writing week with Writers’ Blok by Ja¢kson Pearce:

And really, Darcy and I are writing, not searching out empty mall parking lots for impromptu dance routines. We swear it.

Here’s a joke I thought up in the shower this morning (yeah, brace yourself):

Why is the manuscript cold?
Because it’s a draft!

Oh, I slay me. Seriously, I think this may be a symptom of someone who has been spending far too many hours with a manuscript draft (and in case you’re wondering, that would be me).

I’ve been putting a lot of words into the manuscripts, and not a lot (obviously) here. The bonus: unintentionally funny typos, such as:

Crush. I meant crush, because there is not even a hint of a zombie in our book. Although Jen did suggest a Geek Girl’s Guide to Zombies, but I think we’ll save that for another day.